Update on my adjustment to German life - I have my license and can now drive, which isn't too difficult other than the ridiculously narrow roads and some interesting ideas about right-of-way. Still, much easier to learn to drive here than it was in Turkey.

We have found a house to rent and will be moving in with temporary loaner furniture and our 25 suitcases next week. The hotel has been nice but we're all looking forward to have a bit more room to spread out.

Okay, so quilt number two that I saved to blog about later: 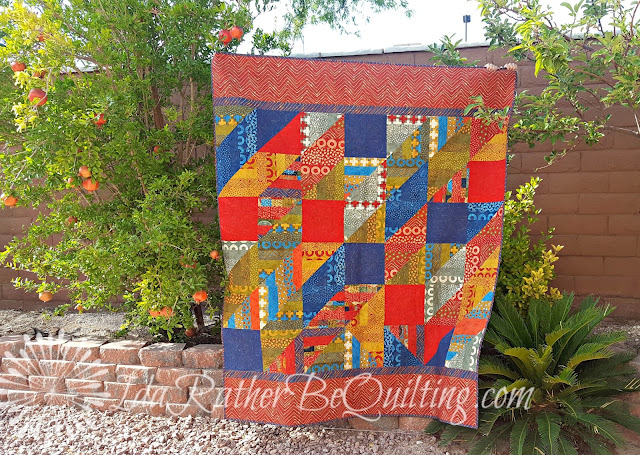 This quilt is called Friendship and was made from a jelly roll of Simple Marks by Malka Dubrawsky for Moda. I pieced the strips together in sets of four, trimmed them into squares and then created half square triangles with other strip set squares. As always, I threw in a few solids for visual rest. When I had pieced together all my HSTs, the top wasn't quite as big as I was hoping for so I added two borders of Simple Marks yardage to top and bottom.

I think this line has a funky, modern vibe and wanted the overall quilt design to be in tune with that. It was also important that the quilting be modern as well so I chose a freehand striped seed pod pattern for the body of the quilt and then just echoed the wavy lines of the borders. 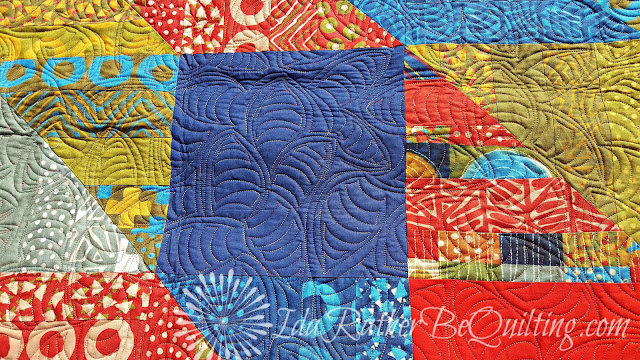 For the backing I used a dark green batik and as always, added my Spoonflower-made label. 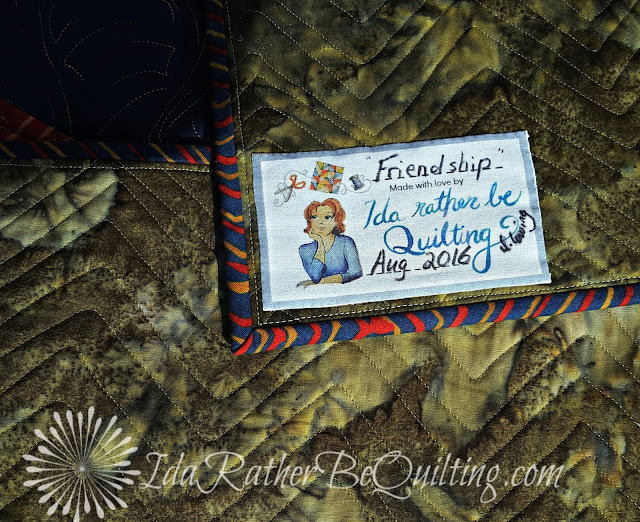 The quilt was for my friend Ruth. Have you ever had God put someone in your life for a specific purpose? Ruth and I, in many ways, are not alike. But it became clear fairly quickly that God had put Ruth in my life. It was like He was saying, "Here. You two are going to need each other. So reach out and hold on."

Ruth became an anchor for me during some pretty rough storms and a light in a dark time. She taught me about healing and energy and how to work through pain. She is one of the most intuitive people I have every known. And one of the most real. She has a lovely soul. 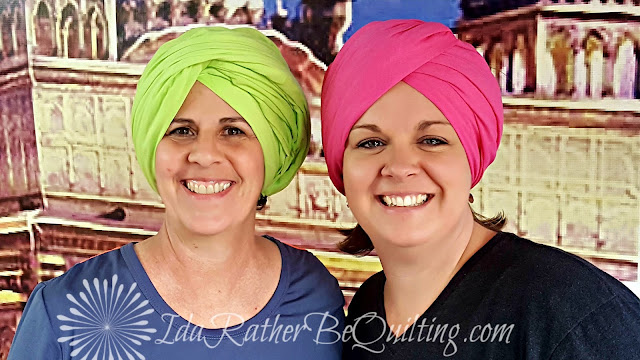 And she's willing to get a turban wrap with me at an Indian Food and Culture festival both our families attended. (Yes, I totally wore this the rest of the day, even to the grocery store.)

We knew that saying goodbye was going to be hard for both of us. So we kind of avoided it. Ruth was going to be at a family reunion when we actually left so we went to lunch a few days before her trip and chatted like we always do. We hugged when she dropped me off and tried not to tear up.
And I didn't give her the quilt.

Because I knew that if I had given it to her then and tried to explain what she had meant to me during the past three years, we would both be blubbering messes. So I had entrusted Maria, the friend I made  Purple Pretties for, with a mission.  After I had moved away and once Ruth was back in town, she was to deliver the quilt. I included a simple card that read, "You blessed my life in so many ways. Thank you."

Sometimes a few words have to stand in for all the words you can't find.

And often a quilt has to stand in for all the hugs you won't be there to give.