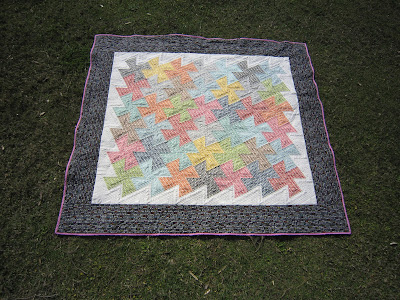 I'm still figuring out this whole naming your quilts thing.  It does make a quilt seem more like a unique work of art instead of just a sewing project, doesn't it? Since this quilt was made with a Pezzy layer cake and the Twister tool, I thought Twisted PEZ was an apt moniker.  It also sounds a little like a punk band which adds to the whole teenager vibe as does the texting abbreviations fabric we chose for the border.

This quilt has a bit of a history. My daughter Delaney purchased the layer cake with her own babysitting money while we were still in San Antonio. She laid them all out and sewed the squares together along with the white border. But then that whole pesky cross-global move thing happened and it sat for a while in the UFO pile here in Turkey.  Meanwhile I accidentally used the orange fabric we had purchased for the border and binding in a baby quilt. My bad. But I did help her pick out some new fun fabric and ordered it for her. And found the pink binding fabric here in Adana.

Eventually we got it out and she used the twister tool to re-cut and re-sew the squares and added the black border. This is not her first quilt. She has done a baby quilt and a jeans quilt. But there were still some sewing lessons to be gleaned from this project and a few tears of frustration as well. A seam ripper was used. More than once.

After the top was finished it sat some more in the sewing cabinet. Then last Saturday I was ready to sandwich and baste my Freedom Star quilt and I asked Delaney if she would like to sandwich her quilt as well.  Sandwiching is my least favorite part and I always recruit her help as it is much easier with two people.  And since I was going to be crawling around on the back porch anyway I thought we might as well get both quilts ready.

I fully intended to start quilting my star quilt. But when Delaney said she would really like me to do the quilting on her Pezzy quilt,  I grabbed that instead and started. I'm not sure why. Old habits of putting your kids' needs before your own I guess.

I sewed two echo lines inside each pinwheel and then around the whole pinwheel center all with my walking foot which required a lot of pivoting. (ugh) Then I decided to try some free-motion in the negative space on the white border.  I did two rows of pebbling and a larger row of figure eights. I think it went better than it ever has. No shredded thread, no skipped stitches, no thread breakages. I wish I could say why it went so well but I have no idea. Same machine, same thread, same operator.
I did a simple elongated scallop stitch on the black border with my walking foot and bound it with some pink fabric bought here in Turkey. One cool thing about fabrics here is that most of them are 93 inches wide so they are great for binding. It only took 4 WOF strips to bind this thing and I had almost a yard extra. The back is a fun pink, green, and black plaid. 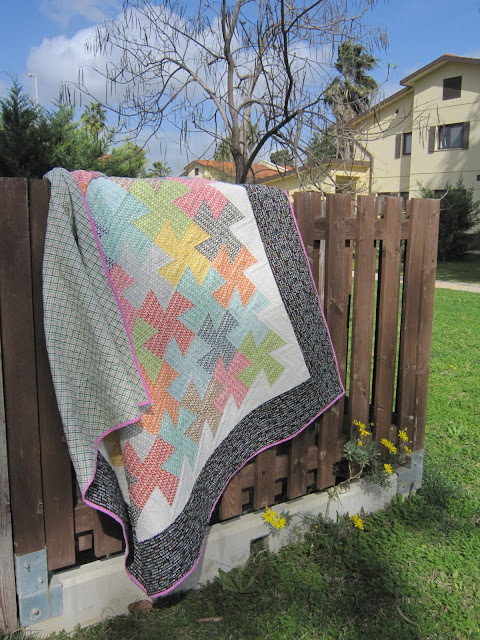 Delaney was at a friend's house watching movies last night so when I finished I put it in her room and then went to bed. When she got home she came in and woke me up to tell me how much she loved it. Yay!! Success.  (By the way, if you are wondering what she looks like, scroll down a few posts. She's the gorgeous blond with the viking helmet on her head.)

So even though it wasn't my quilt, I'm still counting this as a finish for me and crossing it off my WIP list. Now I can move on to : 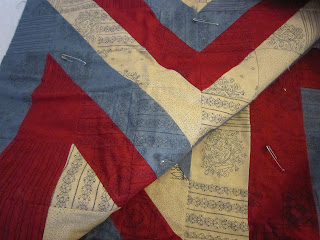 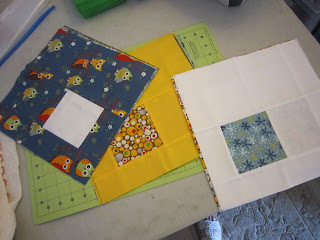 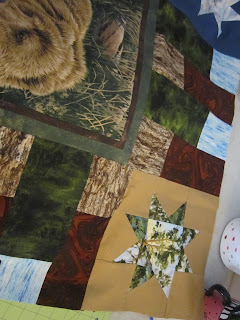 And even though it is already late Saturday morning here in Turkey and this is not strictly a quilting blog, I'm linking up with Crazy Mom's Finish It Up Friday, TGIFF, and Can I get a Whoop Whoop? Cuz it makes me rather giddy to see my amateur efforts alongside all that gorgeous quilty eye candy.
Posted by Ida at 5:08 PM