Disclaimer: this post is not strictly about adventures in Turkey (although it does include a trip to a Turkish fabric store). But at least one of my quilting friends wanted to see what I have been up to sewing wise.

I still order fabric off the internet - the blessings of having an APO address. In fact the only Black Friday shopping I did was for fabric! Two different sites and I'm not admitting what the total damage was. But this month I did venture down into Adana to visit the 5 story fabric shop. I dutifully brought my camera to document the trip. And then failed to take a single picture. ... .sorry.
The bottom level of this fabric store was where the cottons were sold. Other levels had suiting/shirting fabrics, home decor fabrics, and drapery fabrics.  The walls are lined from floor to ceiling with shelves full of bolts of fabrics. In front of the walls are counters. And between the walls and the counters are clerks. You aren't allowed to go behind the counter yourself and look at the fabric. Instead, you indicate to the clerk which bolt you would like to look at. He (they were all men) will bring it down and unroll it on the counter so you can feel it. He will do this again and again and again until you have a whole mess of bolts on the counter.  Then when you decide what you want and tell him (by the meter), he grabs a meter stick does a rough measure in the air with the fabric and cuts it with scissors. No careful smoothing on a flat surface to ensure exact measurement. But it works. He then keeps the fabric and begins to write up a ticket. When you are done with all your purchases at that counter he will give you the carbon copy of the ticket and keep the original and the fabric. The check-out is at a high counter near the door. You hand that clerk you carbon ticket and pay, after which another clerk will give you your already bagged fabric as you walk out the door.
The quality of the fabric is not five star, $10 per yard standards. But its not cheap Walmart fabric either. Somewhere in between. And quite a bit of it is double width. So one meter of fabric is a LOT of fabric. The prices were 12 Lira for the double wide and 7 lira for the single wide. So that's about $7 per yard and 4$ respectively. Not bad.
I didn't go in there looking for anything specifically but I did buy several different black, white and red fabrics. And then I saw a double wide width that reminded me of a fall color scheme and a maple leaf quilt block that I wanted to try. So I bought the backing and then then matched some solids for the leaves. I probably won't cut into these for a while but it was fun to get them and fabric doesn't go bad. 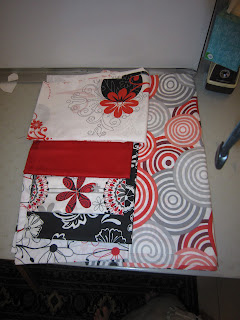 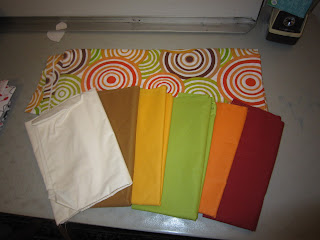 Meanwhile, I have been doing some sewing. I've made three baby quilts in the last month or so. The Primary president in our branch had a sweet little girl named Magnolia. Maggie for short.  I don't have a lot of girly baby fabrics but I did have some leftover ladybugs from the Grouchy ladybugs wall hanging I did for my sister and some leftover flowers from a skirt Delaney made. So I found some more scraps and came up with this: 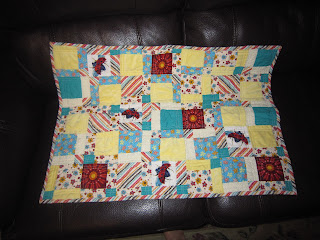 Its a disappearing nine patch. A little small but its a great size for tucking around a car seat.

In looking through my scraps I realized how much orange I had. So the next baby quilt, which was for Ayten's new granddaughter was destined to be orange.  This one was just off-set bricks. I used scraps of yellow minky in both, which made for some lovely softness but was a pain to work with.  This one finished out much larger, a good crib size. 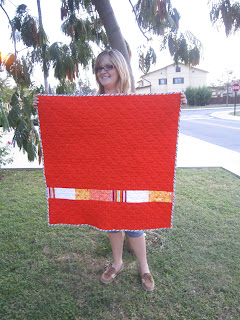 Because of the strict rules here about American military goods getting onto the black market, you have to be very careful about giving gifts to Turkish people. And they have to be careful about accepting them. So Ayten had me drive her to the gate, and drop her off. She walked through on her own, and then I walked through with the quilt in a bag and gave it to her outside the gate.  Since I had not used anything from the exchange or the commissary,  I thought it was alright to give it to her. She said her daughter loved it and it was 'cok guzel' which means very beautiful. The baby was her first and was named 'Yamer.'

The third quilt was for my next door neighbor's new baby. She had not found out the sex beforehand so we didn't know it was a boy until he was born. I was relieved because I didn't think I could come up with another girl quilt.  I did have plenty of boy fabric, including some leftover tumbler blocks from Evan's space quilt. Remember that one? 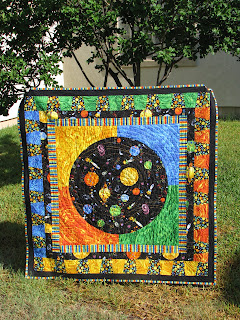 Well, I had enough tumbler blocks to do a quilt center and enough leftover scraps to do two borders (with a little fudging) and the binding all from the same line of space fabrics. Not enough to do the backing but I did have something from a clearance sale at Creative Sewing Center in Texas that would work. (In fact, I think I like it better than the backing on Evan's quilt.)

I finished this on in one day, thinking that I would take it to the new mom when I brought part of a meal. But, then the neighborhood ladies started talking about doing a baby shower and then my neighbor had to go back to the hospital for two more days (she's home and okay) so that turned out to be over-ambitious. I like how this one turned out. 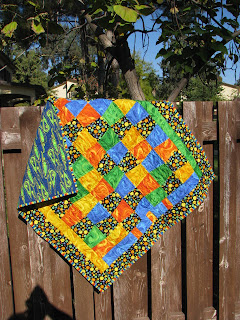 Future quilting plans? Well, Brannick is dying for me to make his Edgar Allen Poe spiral quilt. He's been a bit jealous of these baby quilts. And I've been considering sending a quilt up to Frank and Crystal in Germany as a thank you for being such wonderful hosts. With all the scrapbooking I need to get done before Christmas ordering deadlines, I'm not sure that is feasible but we'll see.
Posted by Ida at 4:58 PM