My Plus One - now with bonus foot pocket!

In the five or so years that I've been quilting, I've made a quilt for each member of my family. Except the hubby. He may or may not have mentioned that a few times. Just in passing. Casually. Almost nonchalantly.  (Guffaw).  But unbeknownst to him, I did have a quilt in mind for him and have been collecting black and white fabrics for over a year to create it. Here it is! 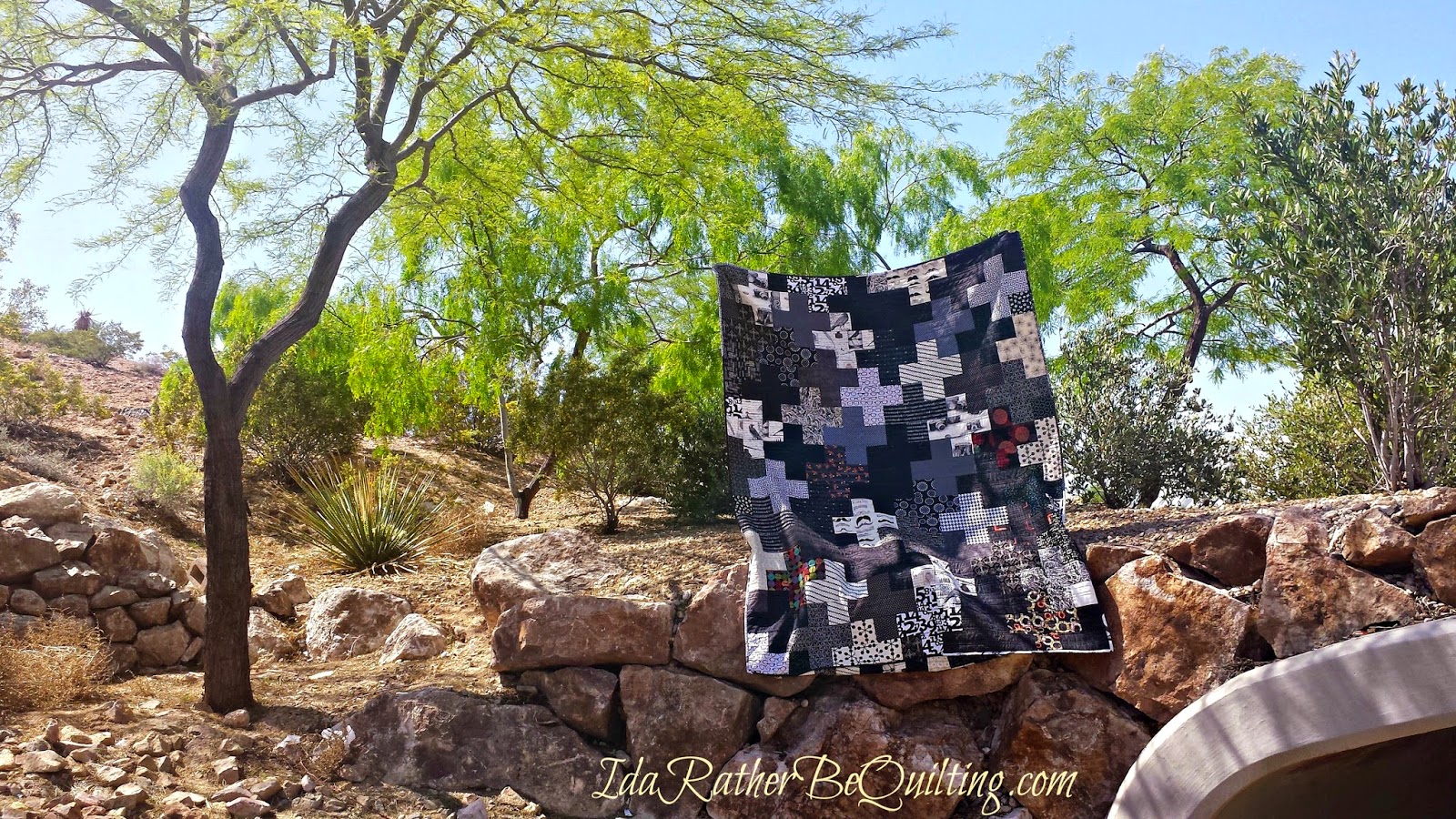 I named it My Plus One because he's my 'plus one' for any event invitation. 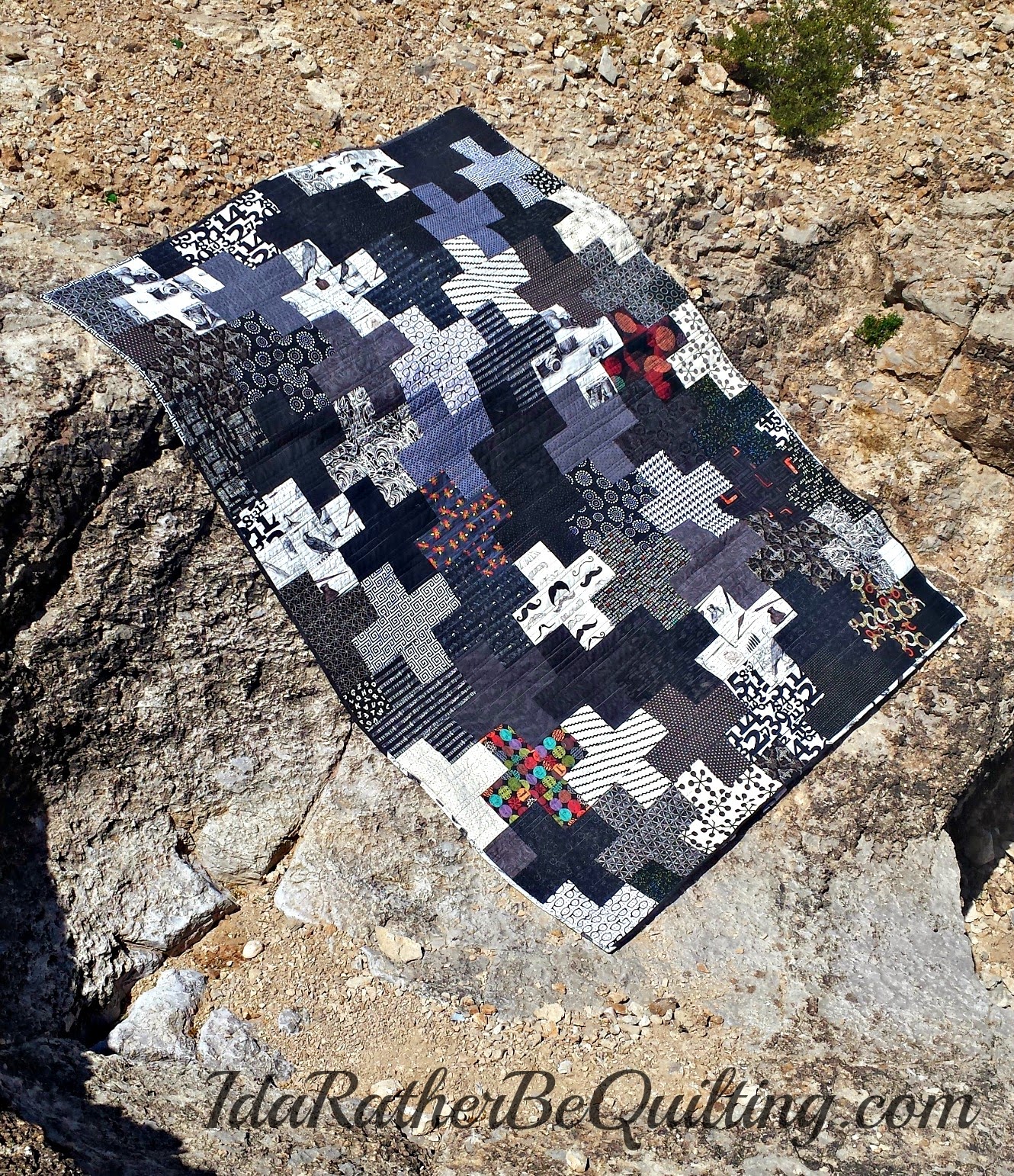 My boys weren't sure about the pops of color hidden in there but I like them. Every quilt needs something that takes you by surprise. Many of the pluses are sets of 5 charm squares. On others, if I had yardage instead of pre-cuts, I just cut a 14 inch solid piece for the middle section and two five inch squares for the top and bottom. I assembled the quilt in rows, a few rows at a time, pressing seams to alternating sides for each row. I ended up with 21 squares down the side and 16 squares across the top. The quilt finished at roughly 92" x 72".

Now before I show you the back, I have to tell you a bit about my husband's brain. It's just not like anybody else's brain.  I promise you, he thinks differently from everyone else on the planet. So when he was hinting that I might like to make him a quilt (cough cough), he included some specifications. He requested that I make a coffin shaped quilt with deep pockets at the upper corners that he could fit his elbows into and a long foot pocket at the bottom. So kind of a quilt-snuggie-corpse-cover type of thing. Um. . . . yeah. Not happening.

But I did take all my leftover squares and make this: 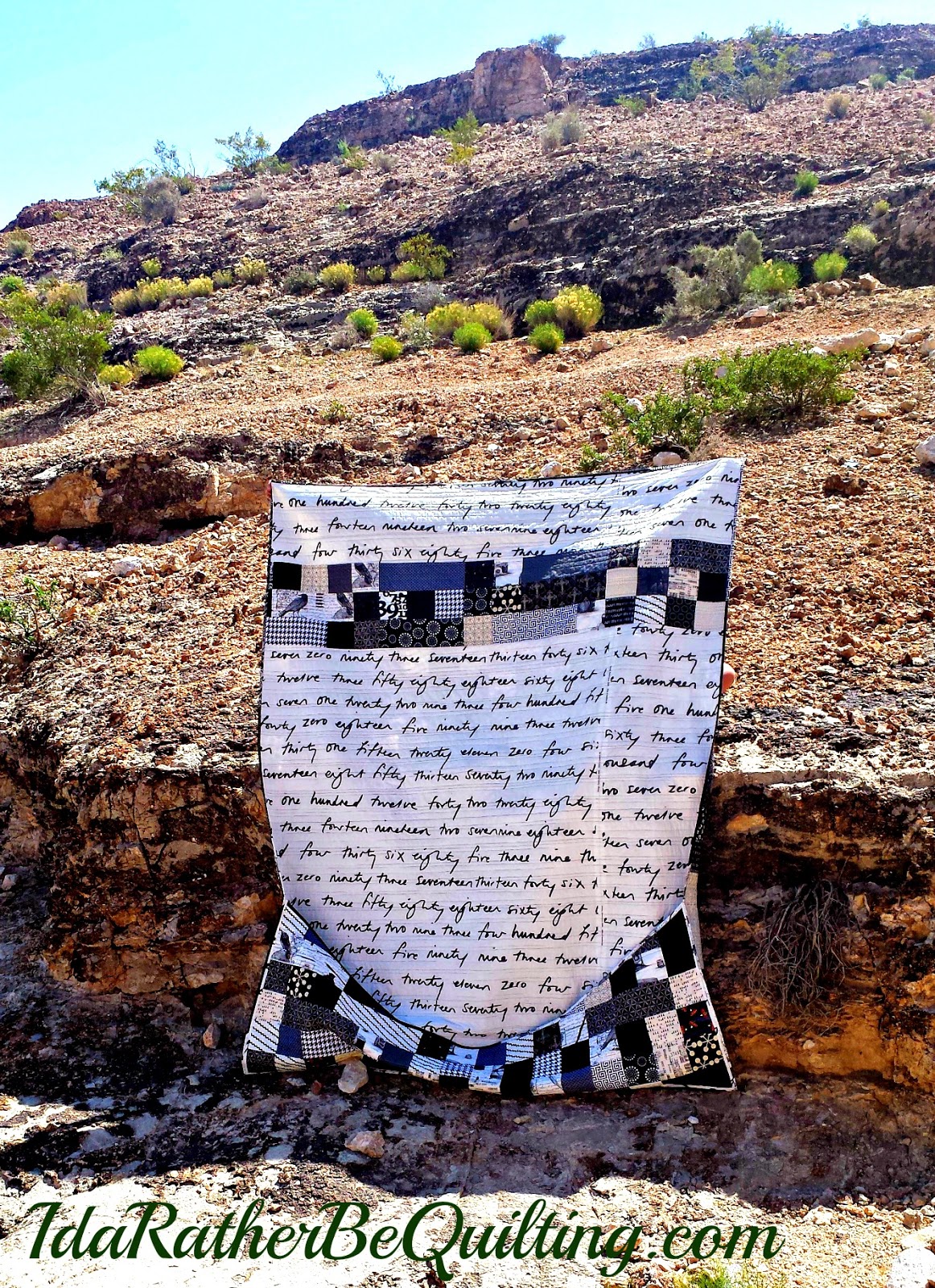 A foot pocket. So his toes won't ever slip out from under the edge of the quilt.  I tapered the sides in an attempt to stop the gapping that I knew would be a problem. It still gaps some but hubby loves it. The one thing I wish I would've done differently is to attach the foot pocket before I bound the quilt. I didn't do that so I ended up making the pocket a smidge smaller than the quilt and binding it separately. Then sewing it on just inside the quilt's binding to avoid a double thickness of binding. It would have been better to bind the whole thing together in one go.

The really funny thing is that after I shared this quilt at our guild's Show and Tell, the next month several ladies told me that their husbands now want a quilt with a foot pocket too! Maybe he's a genius! 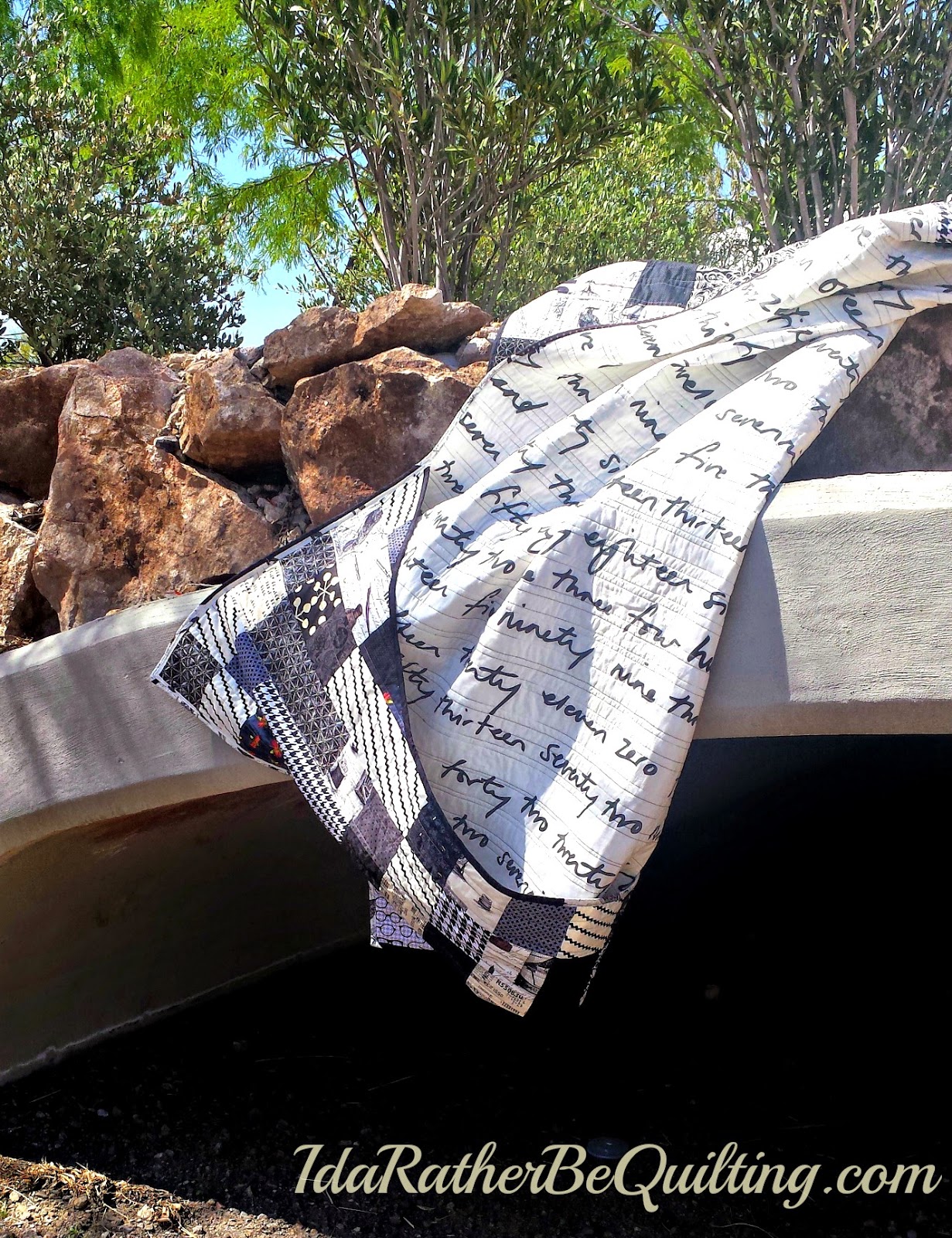 The backing fabric is Britten Nummer from IKEA.  I saw this fabric when I was living in Turkey and begged my mom to bring me some when she came for a visit. Ironic that I didn't actually use it until I was back in the states again. 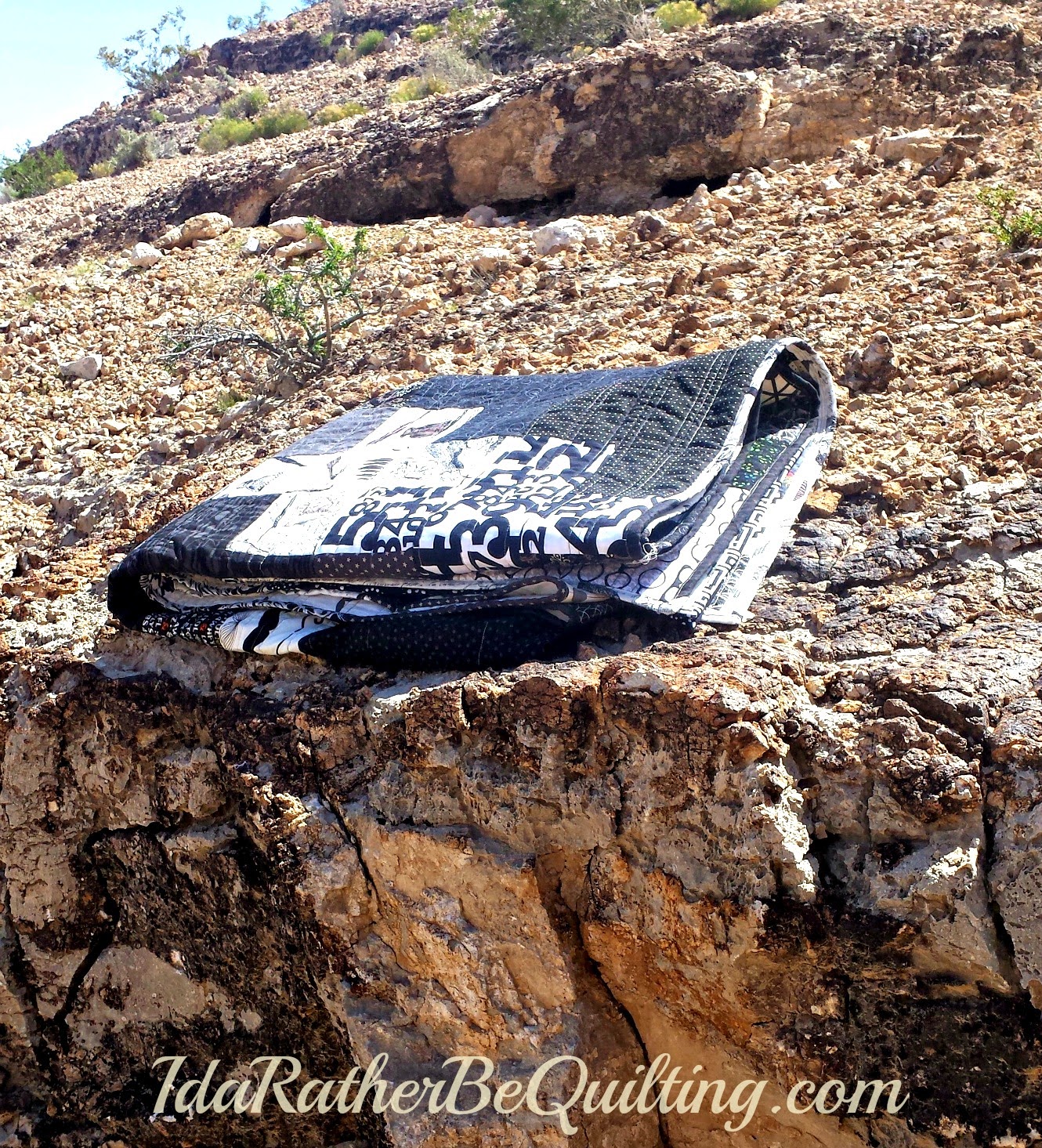 I made a scrappy binding from several of the same fabrics in the quilt. I'm starting to love scrappy bindings. I quilted it on my domestic machine using randomly spaced horizontal lines to echo the geometric feel of the quilt. 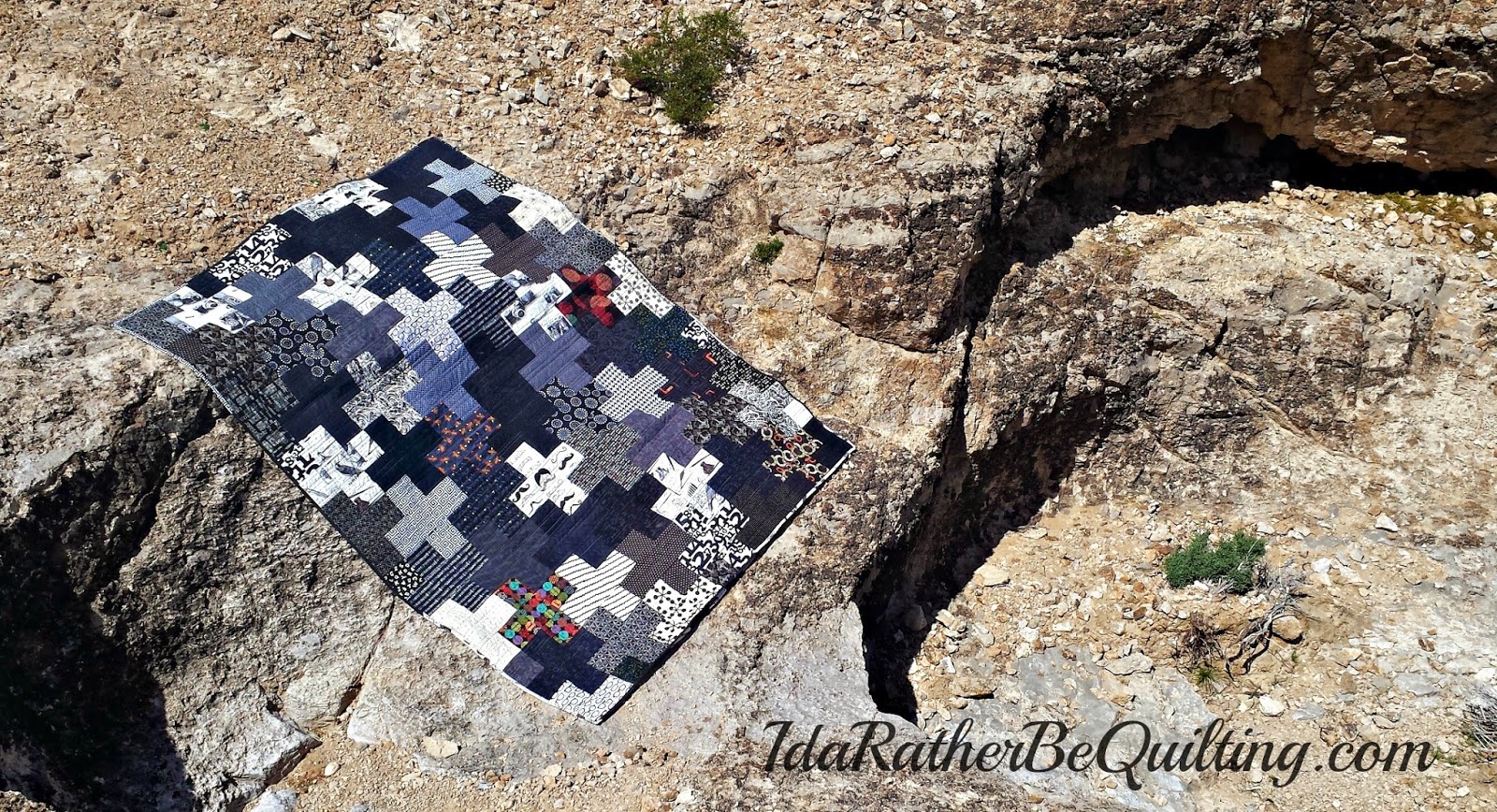 Can you tell we live in the desert? No pretty green pastures and rail fences here. But I thought the rocks and desert foliage went pretty well with the design of this quilt.

I used a wide variety of fabrics from various lines. Some Zen Chic Comma and Zen Chic Juggling Summer.  (Can you tell I like Zen Chic?) My favorites prints were a mustache print, another with eyeglasses, and one with antique cameras. I also had some great Nevermore scraps from my son's Helix Quilt full of ravens and ink wells and old fashioned script. It's rather an eclectic mix.


My quilt holders for this little photo shoot were my two youngest, ages 12 and 8.  I confess I bribed them with ice cream cones. When the 8 year old went to find me a rock to hold down the quilt he discovered this guy hanging out under the tree in the first photo. He's a good sized snake, 4-5 feet long. He wasn't a rattlesnake and was just getting some springtime sunshine so we let him be.  It was a scare for my baby though! 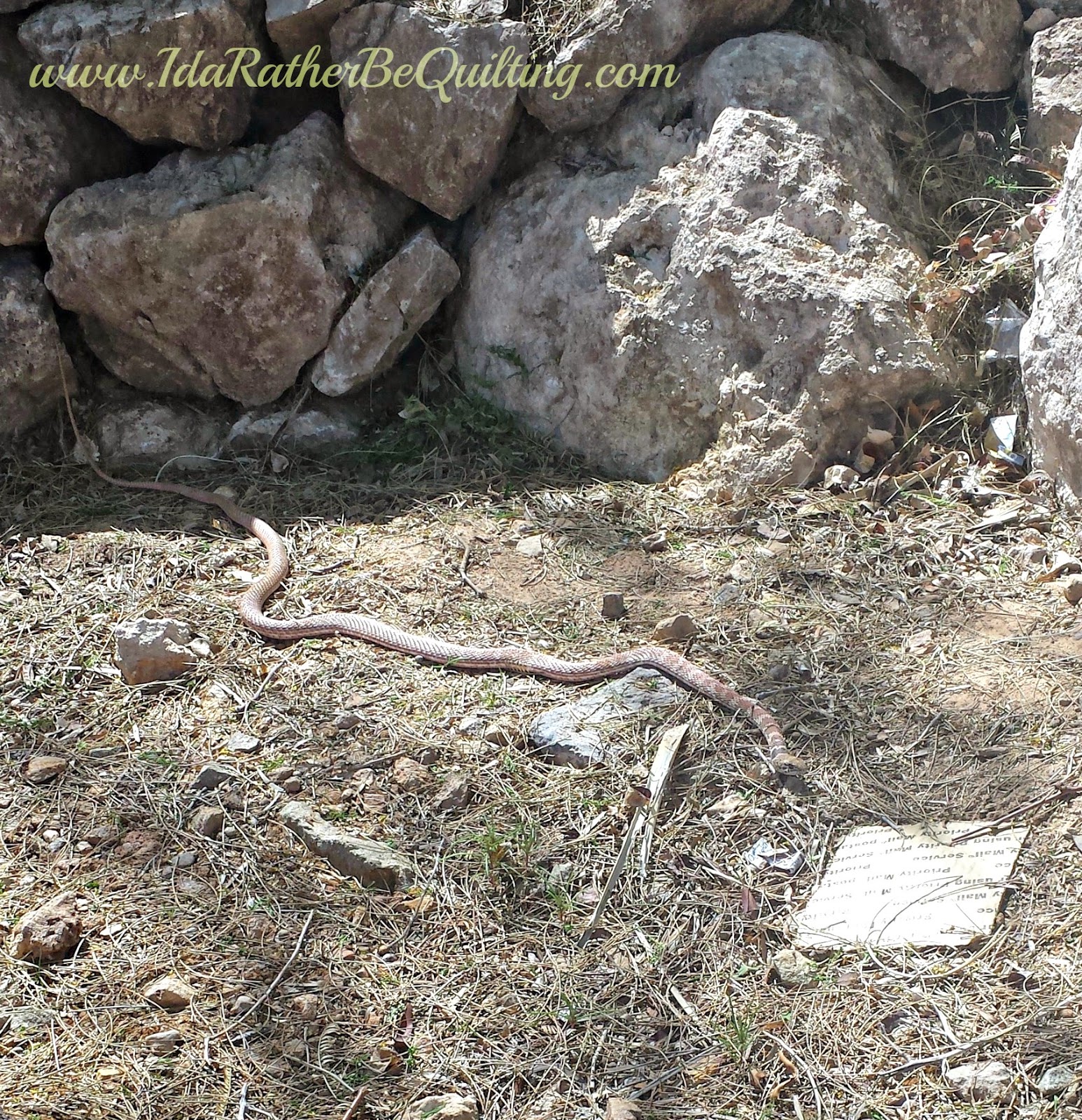 Thanks for stopping by today. I'd love for you to leave a comment or follow my blog. But you may not want to let your husband see this post. He'll be wanting a foot cozy too!
Posted by Ida at 6:00 AM