When mini quilts started to become popular I have to admit I really didn't get it. What was the point? Not big enough to lay under or spread on the back of a couch, too big to put your mug on. The idea of hanging them on a wall like an unframed picture just didn't appeal to me. So I watched skeptically as they spread over the quilting world.

But then I set a goal to improve my free-motion quilting and realized that minis are the perfect way to accomplish this! So I exercised my female prerogative to change my mind and made a couple. And now I get it! They are like the cuteness of a cupcake compared to a whole three layer job. And it is so much easier to concentrate on mastering the motion and speed of quilting without wrestling the bulk of a large quilt.

Here's my first one: 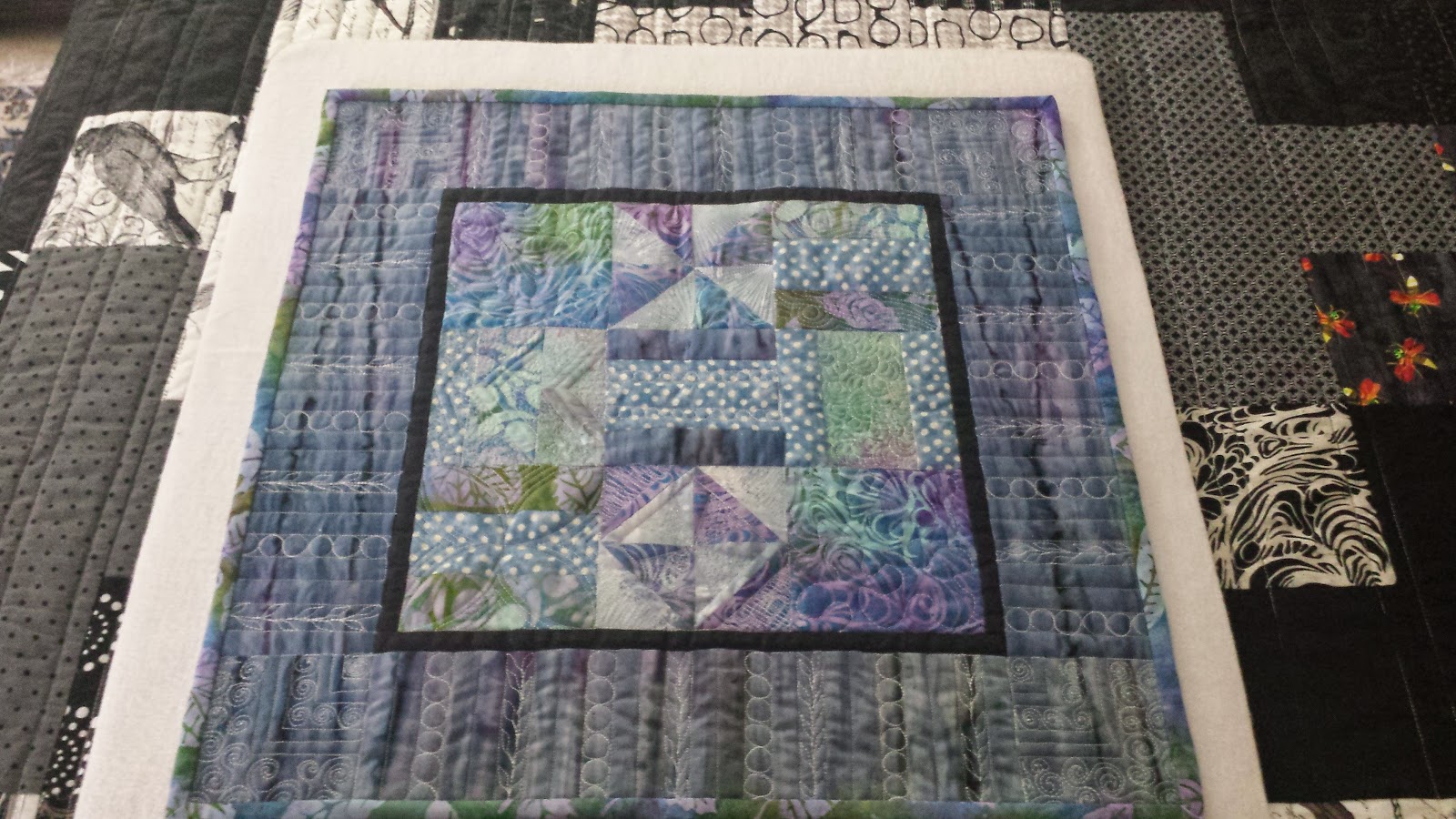 I put it together from some orphan blocks and scraps I inherited from my ex-step-mother-in-law (yes my husband's family is complicated) Robyn.  So it went together pretty quickly. 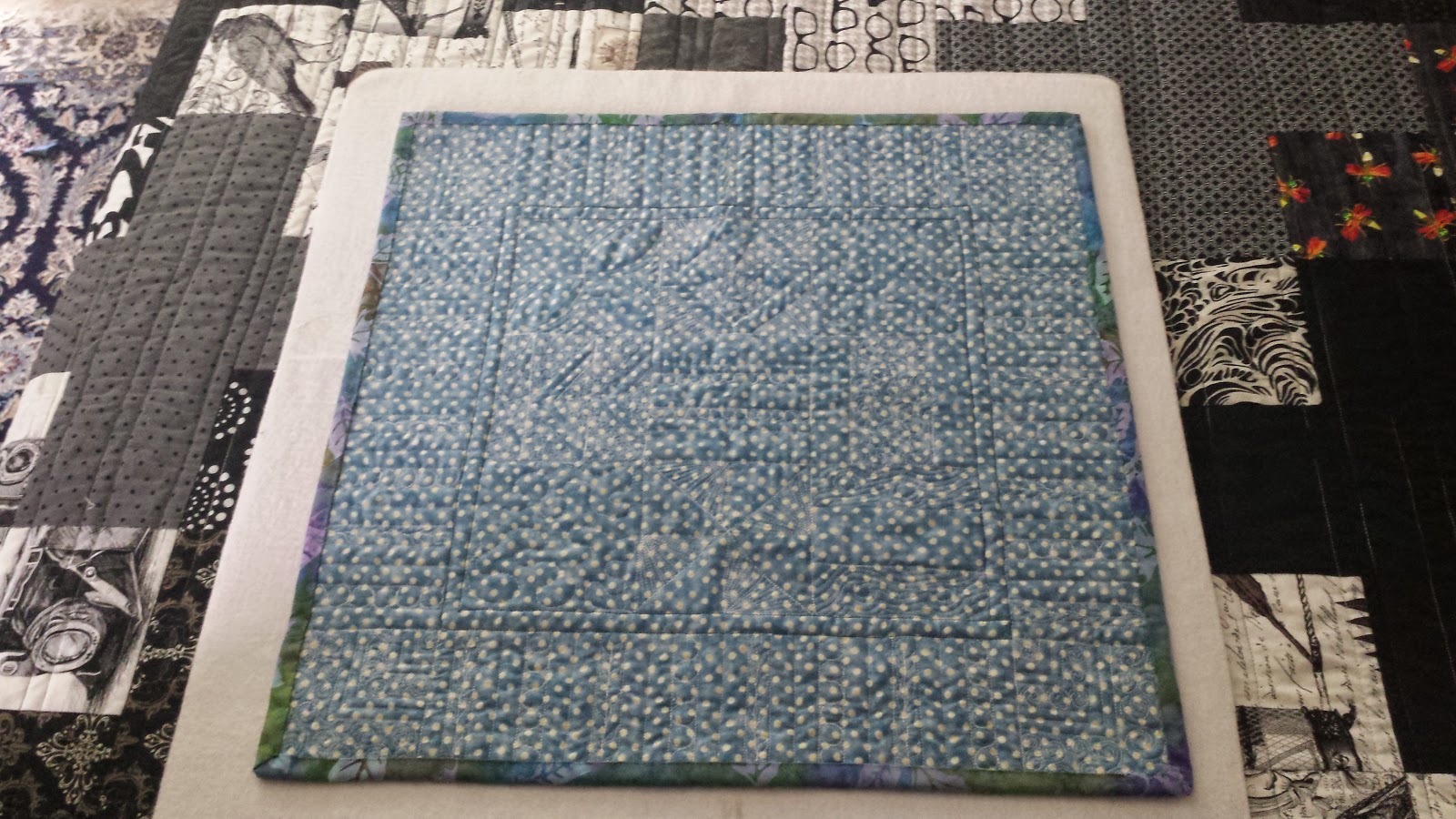 Here is the back. Some fun batiks in a pretty blue palette. 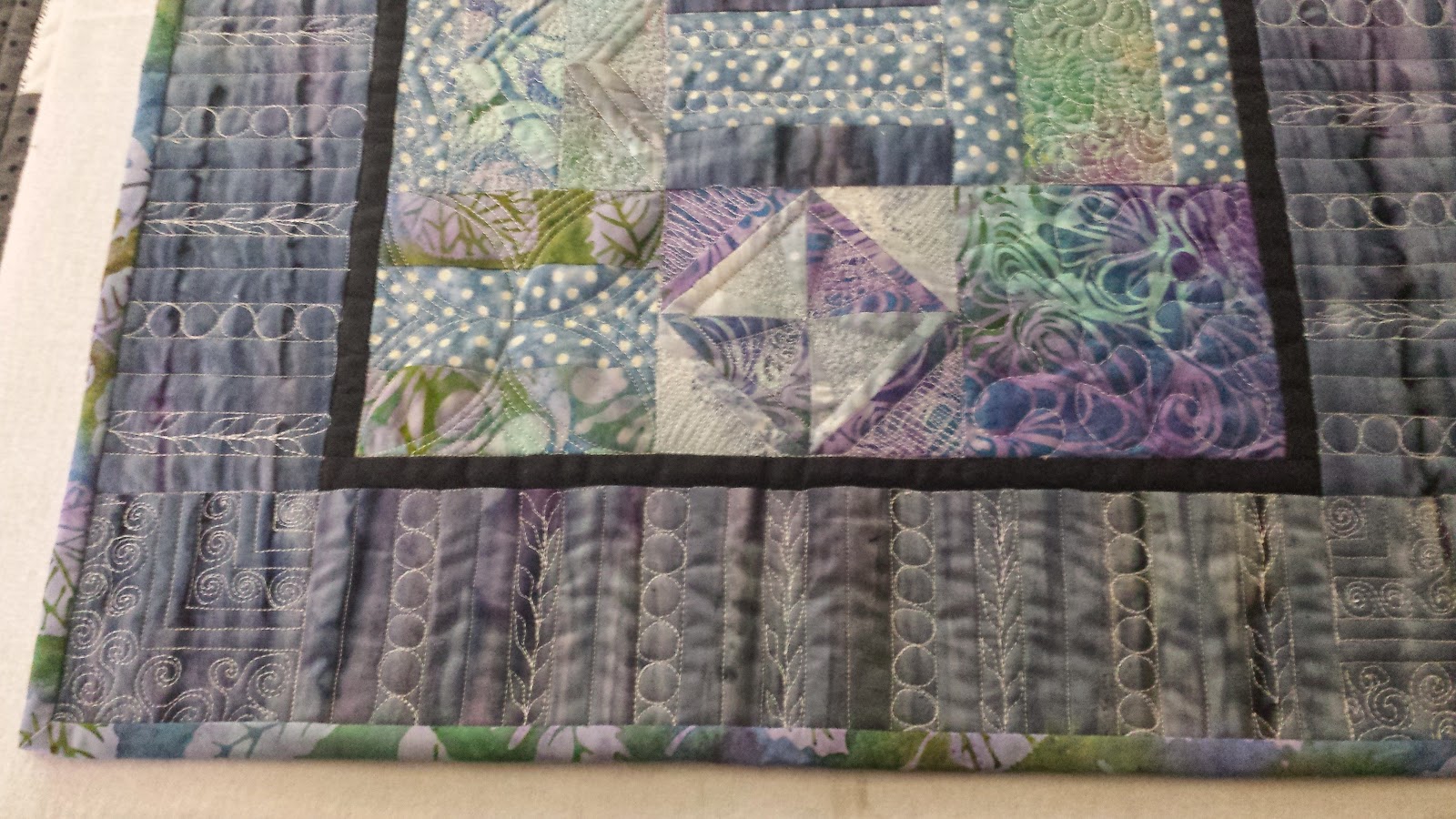 I wanted to work on piano key boarders and miter type corners. I also tried some fun things inside the center blocks.


My new BQF (best quilting friend) Vicki from orchidowlquilts.com  gave me some tips at our next guild meeting.  Namely that I needed to stop doing all my quilting in white or off-white or black and try to match the color of the fabric better.  I thought that was great advice. Especially since her minis look like this: 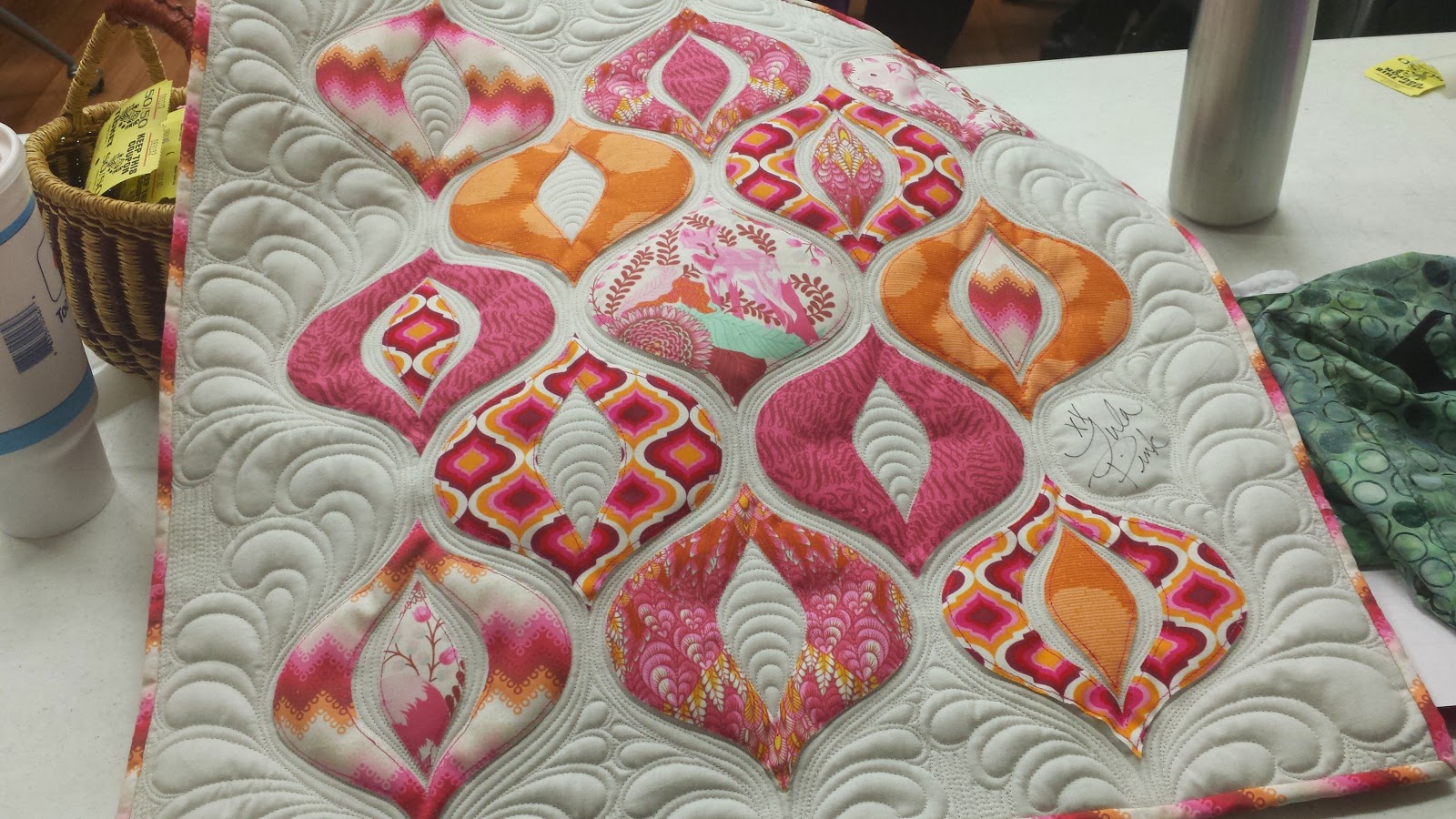 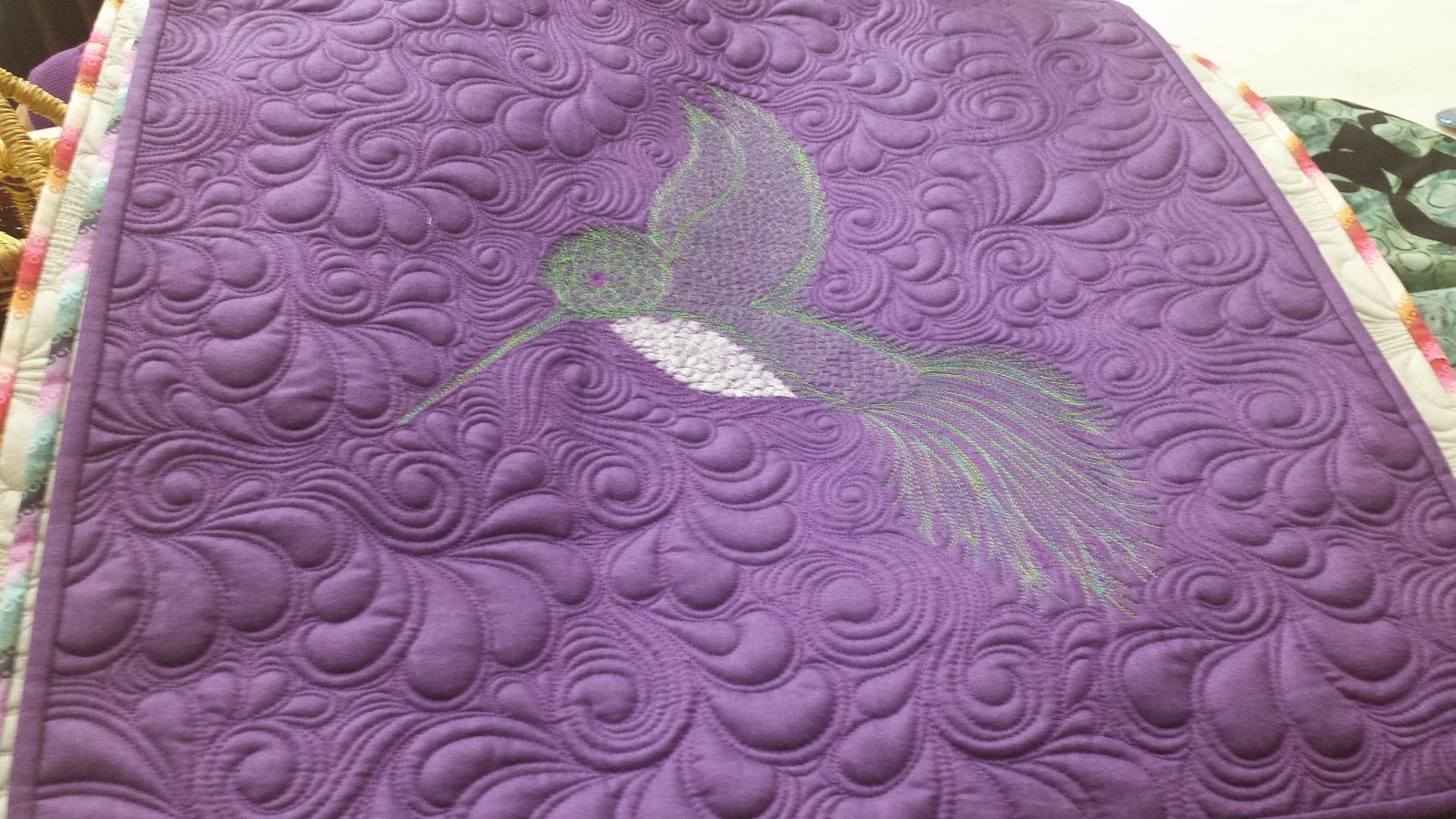 So on my next attempt, I took her advice. And I also tried one with a bit more negative space to work with. This is what I came up with: 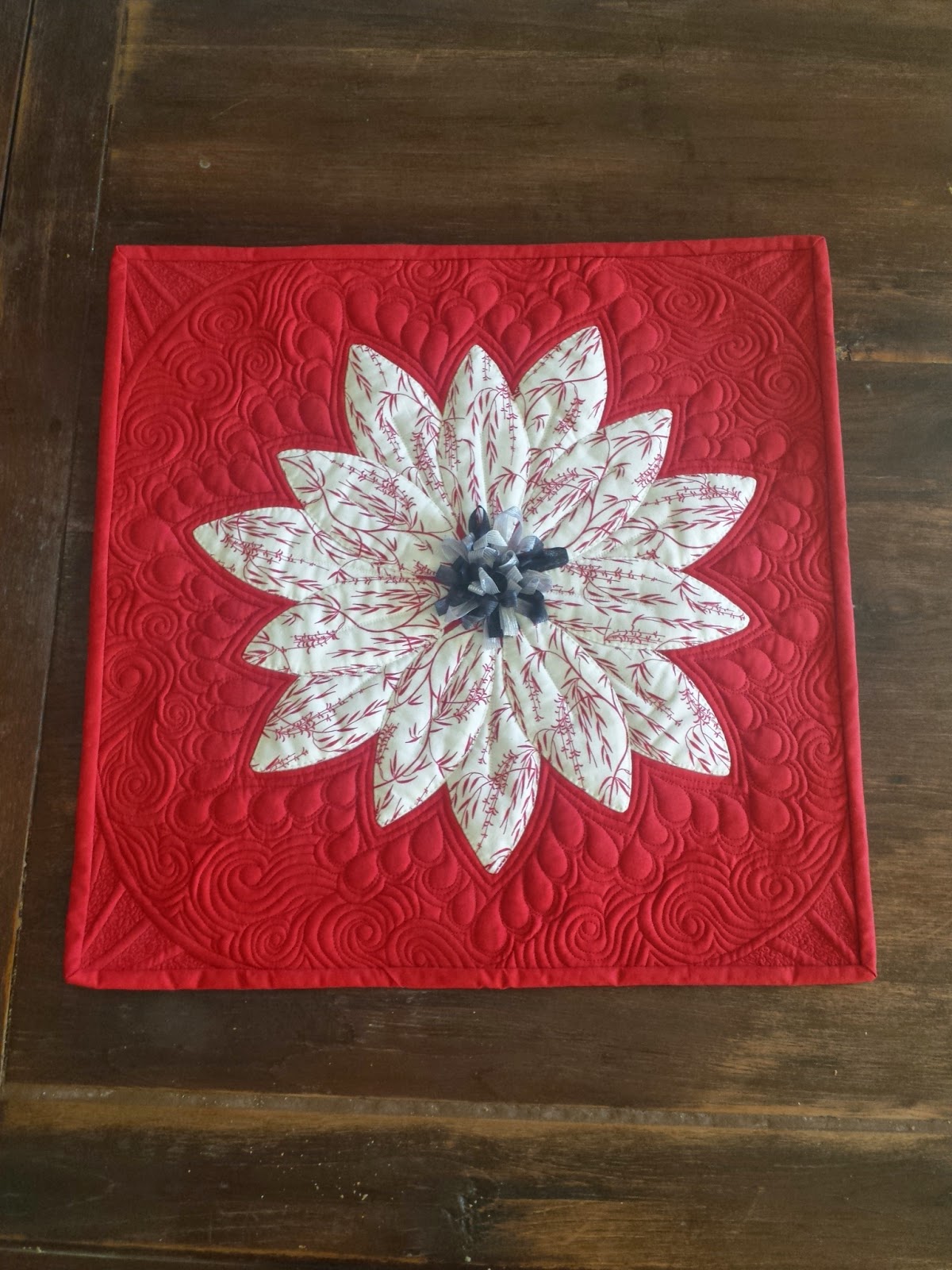 She had also given me some advice on how to do feathers and those cool swirls so I gave them a go.
I struggled with the center. When I finished the applique petals it looked like this: 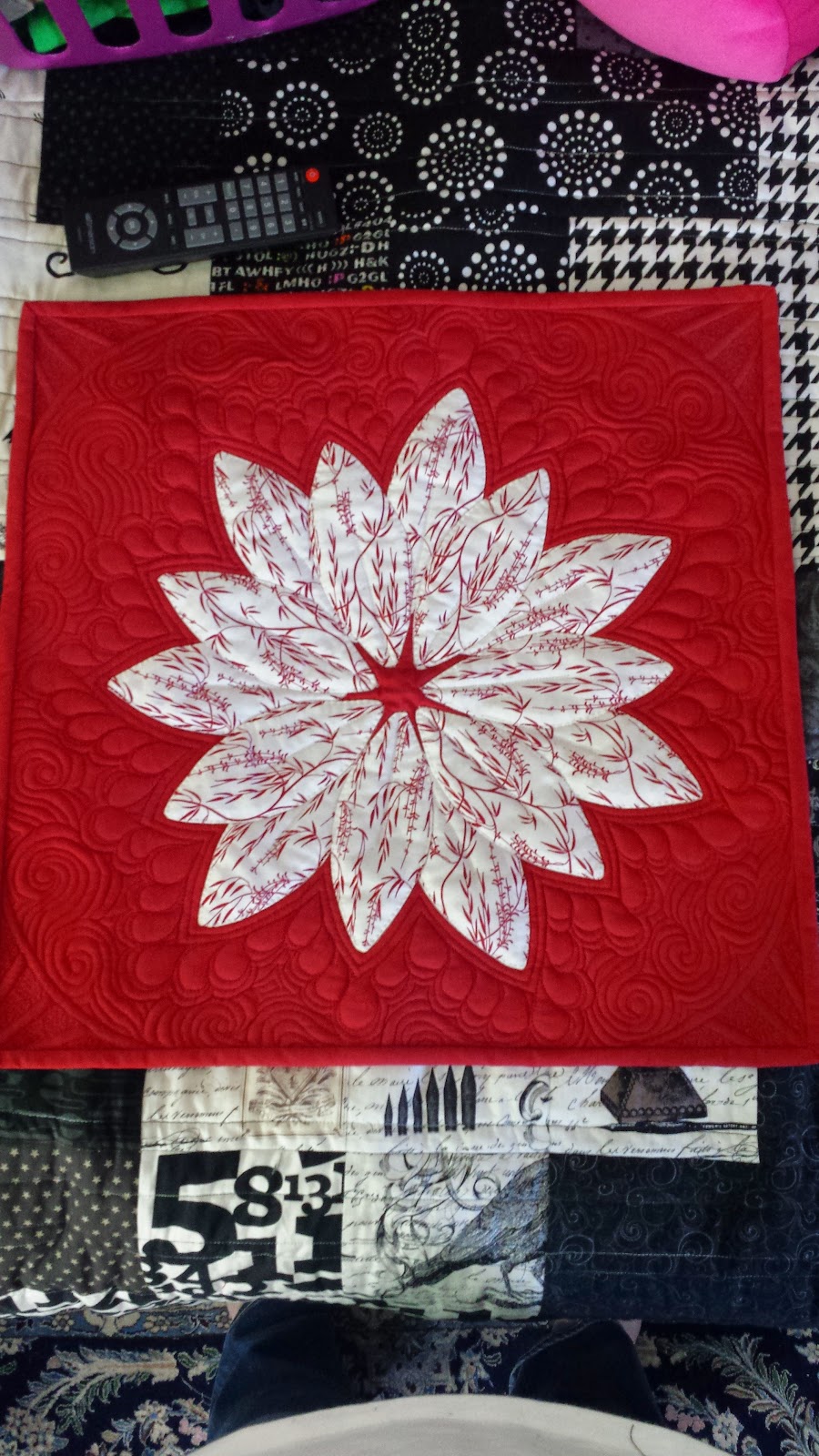 I thought about leaving the center as it was.

Then I thought about adding an applique center; something like this: 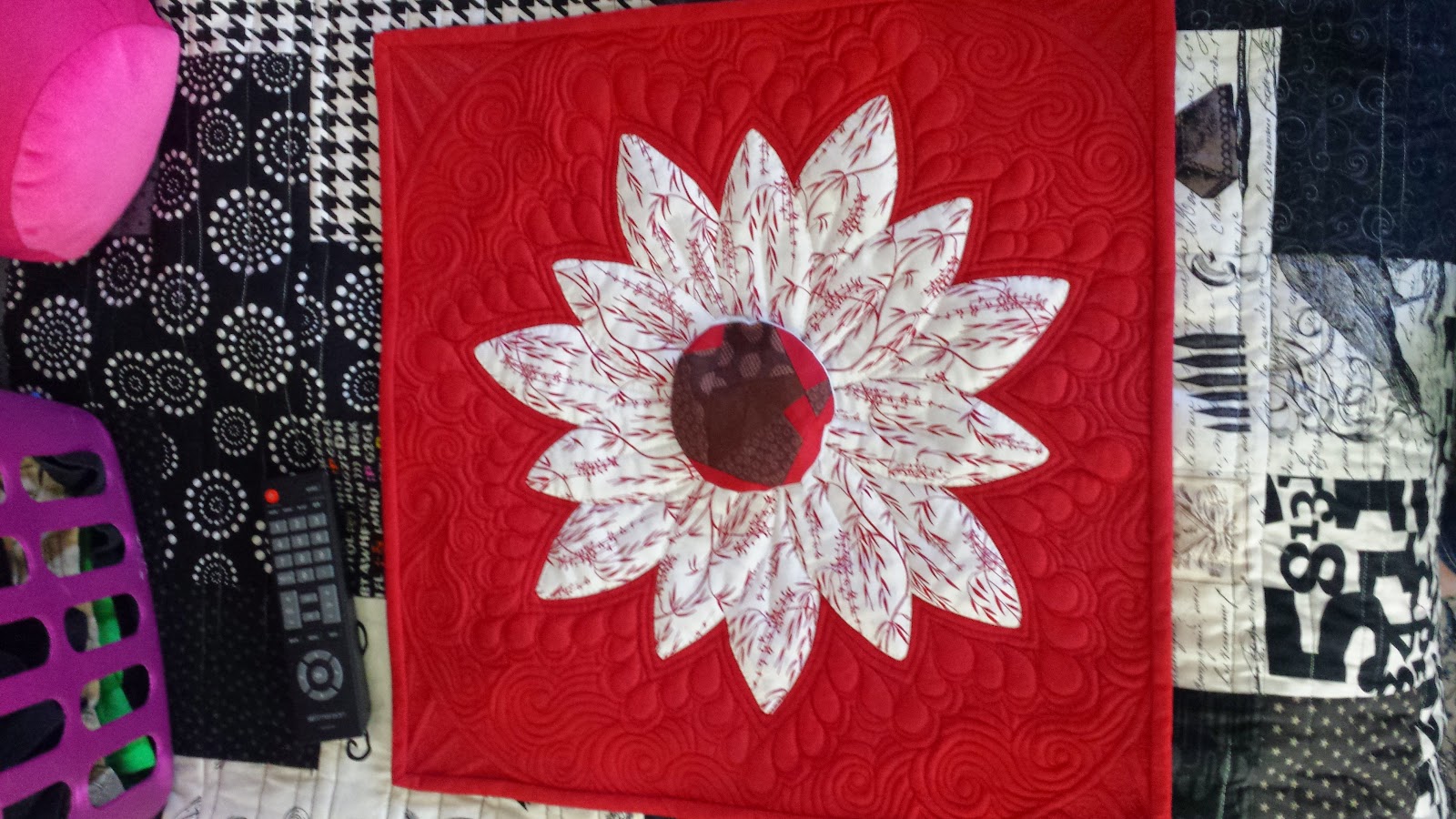 But it just didn't look right. That's when I got the idea to grab a spool of variegated ribbon I had and tack loops down to the center.  I love the extra texture it added to the whole quilt.

I've also been practicing hand binding on these minis.  I machine bind all my quilts and love how quick and secure that is. But I know that if I want to eventually enter my quilts in larger shows I'm going to need to hand bind them.  I kind of hate doing that but with a mini at least the torture is short-lived.

I also used a different kind of thread on this mini. I've always used cotton thread. Usually Gutterman or Connecting Threads and sometimes Aurifil.  But I had purchased some polyester Superior thread from my friend Christa Watson of christaquilts.com. Among them was a lovely red. It was 60 weight thread called The Bottom Line. And it worked like a dream! It has a nice shiny sheen to it and didn't shred or break once! I'm pretty sold.

So there you go - my first two minis.  The blue one became a birthday gift for a dear friend. The red one is hanging on the wall over my sewing machine. And I'm already thinking about my next one.
Posted by Ida at 8:33 PM