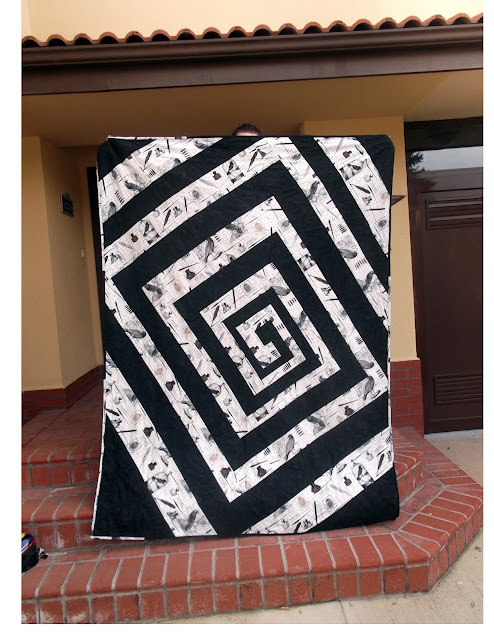 I finished Brannick's quilt!! And even a few days before Christmas. After much web browsing he chose Michael Miller's Urban Grit Nevermore fabric for the focus fabric. He had just finished reading some great Edgar Allan Poe in a literature course and thought the ravens and the script were cool. And far be it from me to discourage a love of great literature!

I used the Helix pattern in Emily Herrick's Geared for Guys book. It was easy - right up until the point where it wasn't. That point was when you took your simple courthouse steps spiral and cut it on a 60 degree angle before continuing to add more steps. All that bias edge was hard to keep square and by the time I was done piecing the top, it was very NOT square. But after several frustrating attempts, I managed to trim it square again.

He requested minimal quilting so it would stay soft. So I stitched in the ditch (which I hate) around the whole spiral and then quilting some random triangular points in the black fabric only. A scrappy binding of both the black marble and the Nevermore finished it off.  I made him wait until Christmas morning to open and enjoy it. As a gift it went nicely with his authentic Turkish bathrobe. He was one comfy teenager!

The other finish I have to report on is more recent - today, in fact. I found a great tutorial on Moda Bakeshop for a padded steering wheel cover and decided to try it. Because here in Turkey I am driving a mom bomb- the most boring white minivan you can possibly imagine. It is old and smells funky and the doors are hard to open and close and the interior is drab grey.


So I took some lovely batik FQs that I bought in Germany in October and made a double sided steering wheel cover.  The tutorial was easy to follow. The only changes I made were to add ties made from Moda twill tape wrapped around two jelly rolls. This was a concession to my husband who was afraid that the cover might slip during an emergency. So I tied the cover on to either side of the center area. Nice and secure.
I love them both but am loving the pinks slightly more. Which one do you like?
Posted by Ida at 5:00 PM