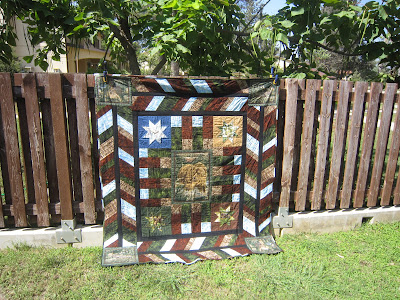 My poor long-suffering middle child finally has a quilt to call his own. This quilt has been in the works since before Christmas but has been put off for baby quilts and a teacher quilt. And if I'm honest, because I just didn't enjoy working on it. Carson picked some wildlife panels that were so not my style and that I had no idea what to do with. And it didn't help that several of them were printed off square. So it was slow going. 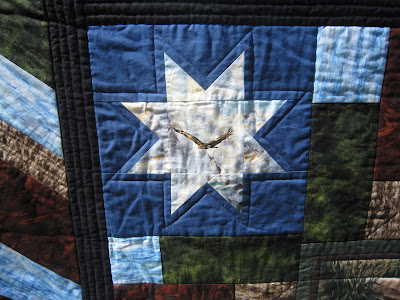 I finally decided to cut some of the panels apart and made some stars with fussy cut centers. These are my two favorite. The other two were a rock and a tree. Not as exciting. 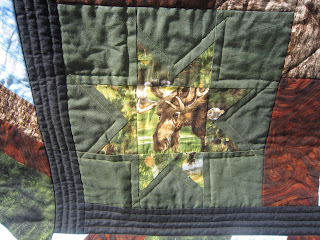 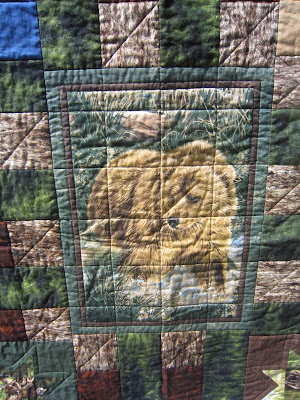 This is the center panel.  Now that it's done I'm not loving the grid quilting. Like his older brother, Carson requested minimal quilting but I felt like I couldn't leave that big space entirely unquilted. Oh well. It's fine. 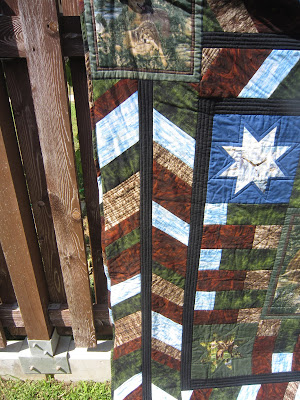 The only sort of pattern I used for this whole quilt was Scout by Cluck Cluck Sew for the borders.  And even that I changed to make the feather portions thicker.  I did some bricks around the center panel. And because I am not a quilting math genius none of the corners pieces, neither the stars nor the wolf/elk panels, match up exactly with their respective borders. You can see that pretty well in the above picture. It frustrated me to no end while I was working on it but now that it's done it doesn't bother me as much. 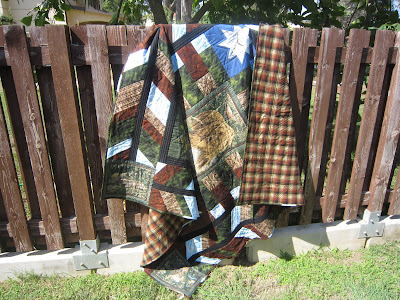 The back was a lovely soft flannel plaid that Carson had picked. This is the first time I have backed a quilt with flannel. I had a few small problems with puckering but I love how soft and cuddly it is. I wish it had turned out a bit longer. Its plenty wide enough for his bed but he is a tall boy and going to get taller so it should have been longer.  Eventually I'll make him another one. But this time I think I will avoid panels and follow a pattern!

I named it Bear Hug. Carson is the middle child but he is the biggest. He outweighed all his siblings by 2 pounds at birth. And he has passed everyone but his dad in height at age 13.  He has a great smile and sense of humor and reminds me of a big teddy bear. And he does give pretty great hugs.

I finished this quilt while he was away at scout camp. And Geoff and I left for our Switzerland trip the day before he got home. So I laid it out on his bed for him to find. He was pretty excited.
Posted by Ida at 5:19 PM